Nik Nikic gets choked up thinking about what it would mean to him if his son accomplishes a seemingly impossible goal.

Chris Nikic, who competes in the Special Olympics, is training to become the first athlete with Down syndrome to complete an Ironman Triathlon competition.

“When you have a child with special needs, one of the things you think about often is if he’s going to be okay when you’re no longer here as a parent,” Nik told USA TODAY Sports in a Zoom interview.

“You worry if he’s going to be able to take care of himself, to live life without you here. The feeling of him completing an Ironman, it means more than the finish line. It’s everything along the way with the training, the community he has supporting him, that tells me, he’s always going to be okay when I’m gone. He’s showing he can do anything he sets his mind to.”

Chris Nikic is 20 years old and says he loves the spotlight that accompanies success in competition. That’s not because he likes the feeling of adoration. In a world where his condition could spur social isolation and strange looks from outsiders, he sees it as an opportunity to connect with others.

“I love the attention because I love people,” Chris said. “It allows me to be like everybody else and (connect).”

That notion of human connection is at the root of Special Olympics’ core mission — to provide those with intellectual disabilities feelings of camaraderie and accomplishment they might not be able to attain in society.

The Ironman competition includes a 2.4-mile swim, a 26.2-mile run (the marathon distance) and a 112-mile bike ride.

“Obviously, the Ironman is not forgiving and Chris gets no breaks,” said Nikic’s coach and Unified partner, Dan Grieb. “You have to swim the full distance, run the full marathon, and bike the full time. It doesn’t change for anyone. Chris is going to be faced with the wall – where it will take a level of grit and mental toughness to get through. He’s displayed through all his practices he has what it takes because he’s been mentally prepared through repetition.”

In Chris’ world, he’s already dealt with plenty of adversity. He had open-heart surgery when he was 5 months old and needed a walker when he was 3.

But Chris says it’s being called “stupid” and feeling “less than” by adults and peers that have hurt the most.

“Having (Down syndrome) means I have to work harder than everyone else,” Nikic said. “I’ve learned to work harder in (life), and that’s helped me be ready for Ironman.”

Nikic, a Maitland, Florida resident, had been training four hours a day for six days a week to get ready for his first Half Ironman competition in Panama City Beach in May, which was postponed. He is now preparing for the full Ironman in November in Panama City Beach. But the coronavirus pandemic has postponed or canceled competitions, and Nikic’s workout regimen has been more challenging with swims at the lake instead of the pool and most workouts outside the closed local gym.

Shriver said the sheltering-in-place lifestyle Americans have found themselves in is an experience individuals with intellectual disabilities know far too well.

“Our athletes have been fighting against separation for over a century,” Shriver said. “Some of our athletes still live in crushing isolation. So maybe in (these conditions), there’s a little bit of solidarity that can be found, and just for a moment, we can take a breath to notice how someone else might’ve been struggling before in isolation the way we are now. I hope it softens our hearts to the pain of social isolation.”

Chris has been competing in Special Olympics since he was 9. But his father said it wasn’t until two years ago that he started seeing his son in a different light.

“The language we use is important,” Nik said. “My daughter (Jacky) was a gifted athlete, and I treated her as gifted whereas I treated Chris as special. Sometimes ‘special’ means you can’t do something. I didn’t give him the same chance I gave his sister because I wanted to protect him. But two years ago, I started treating him as gifted. … My feeling is that God put Chris on this earth to help others.”

Part of this meant talking with the coach, Grieb, about special treatment or coddling Chris during training because of his condition.

“His father freed me up from any concern,” Grieb recalled. “He said, ‘How do you learn all your life lessons?’ I said from failure. He said to me, ‘Would you give (Chris) the same opportunity?’ … It’s going through the fire where he’ll learn to get better.” 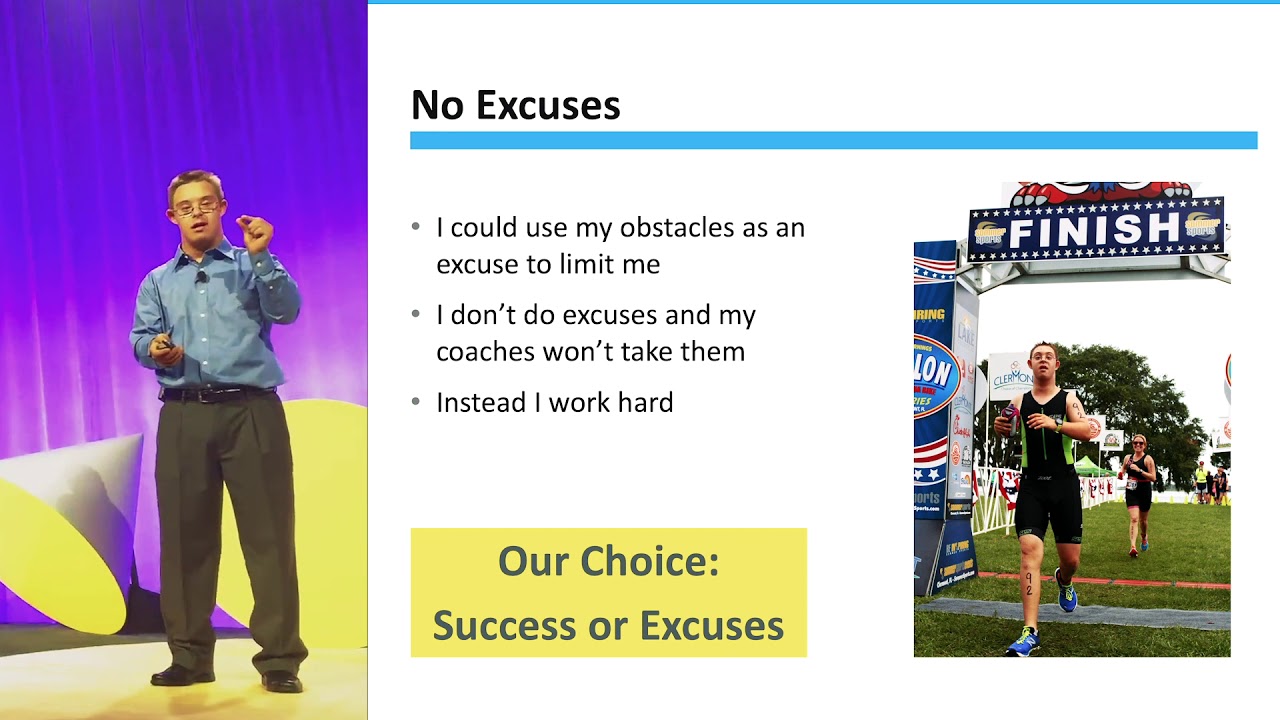 During workouts, Chris has often told Grieb he’s experiencing “fake pain,” alluding to a cramp or a condition he can fight through. His mindset is that he can always get 1% better at something, even if it takes him a longer time.

“I don’t use my condition as an excuse,” Chris said. “Instead, I work harder. … My dad told me, ‘Don’t ever doubt your dreams, Chris.’ He told me God gave me gifts. I don’t ever doubt my dreams now.”

Shriver said he believes Nikic’s Ironman journey can be far-reaching: “There’s a feeling that comes from not being afraid. When someone like Chris is able to step in front of that start line and, sort of, in effect, say to the world: ‘I bet you didn’t see this coming — I bet you didn’t expect this when you looked at me with pity or low expectations because of the way I look,’ that sends a message. Nowadays, we’re desperately in need of people who will shake us out of stereotypes.”